Welcome to the final part of our series on establishing a VPN between Azure and AWS using Openswan and VyOS. This is where the real thing happens. I know if you were like me , you would already be itching to dive into the subject ASAP. Your prayers have been answered. Below is what’s about to go down 😀

Here is a mere formalization that you see more and more in the corporate world where a Company A will send to Company Z a form to be filled where all the specifications about the VPN is captured. Let’s simulate one ourselves. Our Company A is AWS and Company Z is Azure. Here is a VPN form of our project.

Basically we will have: 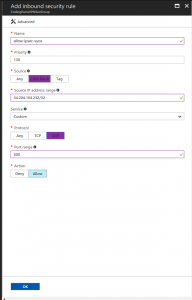 List of firewall rules on applicaiton box on azure

Allowing traffic between the openswan box and its side kick application box is important here. Fortunately for us, we won’t need to write any rule there as Azure default “hidden” rule already allow inbound vnet any to any traffic. To view default rules, click on Default rules beside the “+Add” button

It’s also important here to allow traffic from the vyos box to flow to the app box and vice versa. Generally I allow all traffic and in aws, we are allowing any box with the same Security groups as the VyOS one to send any traffic to the app box.

We are doing the reverse as well allowing any box with the application sec group to send to the VyOS. 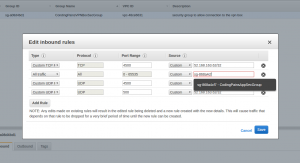 Allowing traffic from App security to the VyOS VPN appliance

Let’s create a route table and add the rules to it. Like in part 2 we can just do a search for route and create the route table like shown below. I gave it the name road-to-aws 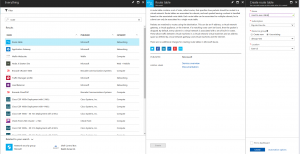 Let’s create a route to both aws public and private subnets. You can use either an IP or a full subnet, since this is the only VPN we will be creating I just use the networks instead. I will show how to create the rule for aws public subnet only then the rest would be self explanatory. 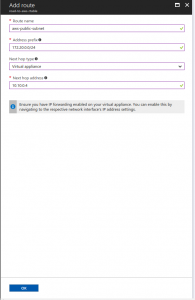 Before the routes become effective, we need to assign it to our azure subnet. If we have had a node inside the private subnet we would have used the same rules. But let’s assign it to the public subnet (default) only. To do that, locate your vnet, look for the subnets, choose the actual subnet and choose the route table like shown below

In AWS we have already created the route tables, let’s go ahead and edit them with new routes. Basically the same rule for both public and private route table 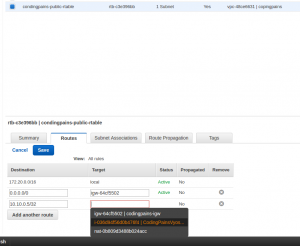 Let’s start the configuration by making sure the /etc/ipsec.conf file has the lines shown below

Now let’s configure our connection in /etc/ipsec.conf let’s make sure we have our connection similar to what’s below using your own IPs etc of course. Usually left side is where we are and the right side is the other side of the VPN. For example since we are connecting to openswan on azure. Left is openswan or azure and right it vyos or aws.

Once that’s done let’s put in our secret /etc/ipsec.secrets and restart openswan .

Type sudo service ipsec restart to restart openswan, you will notice that it will throw an error like:

I can’t remember what the issue it but have done some search about it and here was the cure. Rewrite the private key to be of the pem format

Checking what’s happening at the log level. I smiled at the sight of “MR3, ISAKMP SA established:

Connection from aws to azure

Connection from azure to aws

That’s all folks, I hope this has been meaningful to any of you.